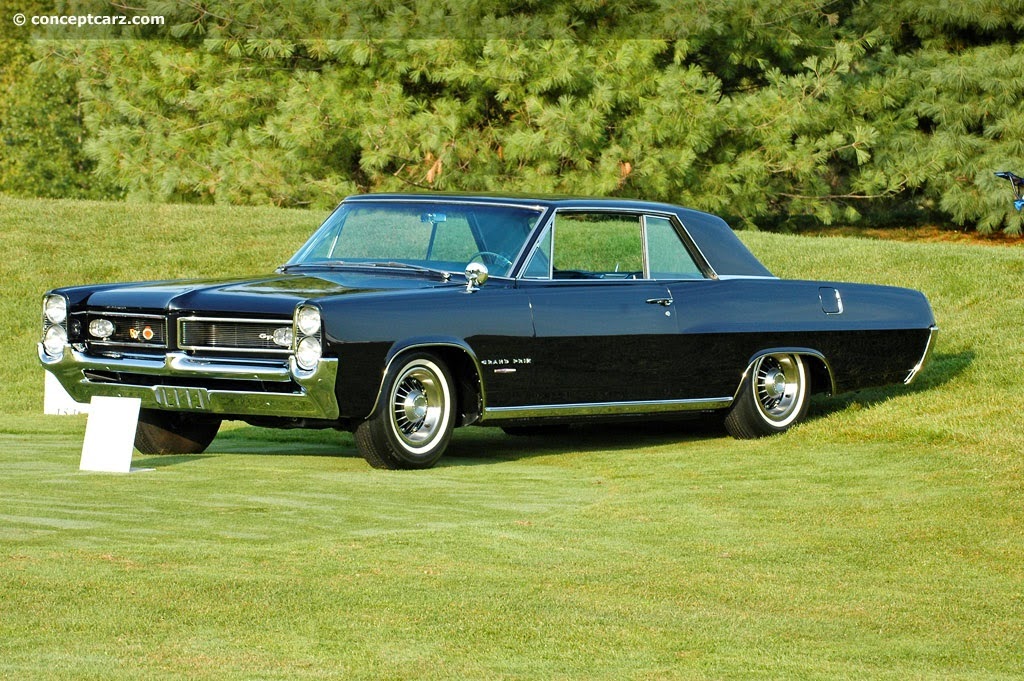 The wildest show car was the 1956 Club de Mer with "twin pod" seating and dual bubble windshields. Standing only 38.4 inches high, its anodized-aluminum body was painted Cerulean blue (Harley Earl's favorite color). After being honored for its '59 line, Pontiac was named Car of the Year three more times by Motor Trend magazine in the 1960s. Some say that award is often breathlessly bestowed on ordinary cars or worse, but Pontiac truly deserved the title. Piloted by engineering-oriented general managers like Knudsen and Elliot M. (Pete) Estes (later to become GM president), Pontiac Division became the home of high performance. The early-'50s image of staid family cars vanished. Again and again, Pontiac introduced exciting automobiles: the unique '61 Tempest, the personal-luxury '62 Grand Prix, the swift and nimble '64 GTO, the singular '66 Tempest Sprint with its overhead-cam six, and the sporty '67 Firebird. All were interesting cars; some were great cars. Most of Pontiac's revolutionary news was made by the compact Tempest, and the intermediate into which it later evolved. The original '61 version won the Car of the Year award for three reasons: GM's first postwar four-cylinder engine, a radical and unprecedented flexible driveshaft, and a transaxle (rear-mounted transmision and independent link-type rear suspension). Motor Trend said the new Tempest "sets many new trends and unquestionably is a prototype of the American car for the Sixties," a summary that was wrong on at least one count. Nobody copied its driveshaft or transaxle (unless we count the Porsche 928 of 18 years later), and not until the late 1970s was there a strong shift in Detroit to four-cylinder engines. The public bought many 1961-63 Tempests, but their more conventional successors did far better. The 195-cid four, created by chopping one cylinder bank from the 389 V8, was abandoned in '64 for an inline six—practical, but hardly innovative.
The Tempest's driveshaft could be likened to a speedometer cable in that it transmitted rotary action through a bend, or at least a slight curve. It was a long torsion bar bent in an arc under the floor—thin, but lightly stressed. Mounted on bearings, it was permanently lubricated inside a steel case. The bent shaft eliminated the floor hump in the front, but not in the rear. It also eliminated universal joints and allowed for softer engine mounts giving better isolation of vibration from the interior. The Tempest transaxle was a first for Detroit (if not the world). Aside from allowing for an ostensibly superior independent rear suspension, it made the Tempest less nose-heavy than its corporate cousins, the Olds F-85 or Buick Special. At the same time, the suspension made the car prone to oversteer, which could be especially alarming on wet roads. Yet the Tempest handled well generally, and tracked safely in mud and snow. Its unit body/chassis had a 112-inch wheelbase that was the standard B-O-P compact platform for 1961-63.