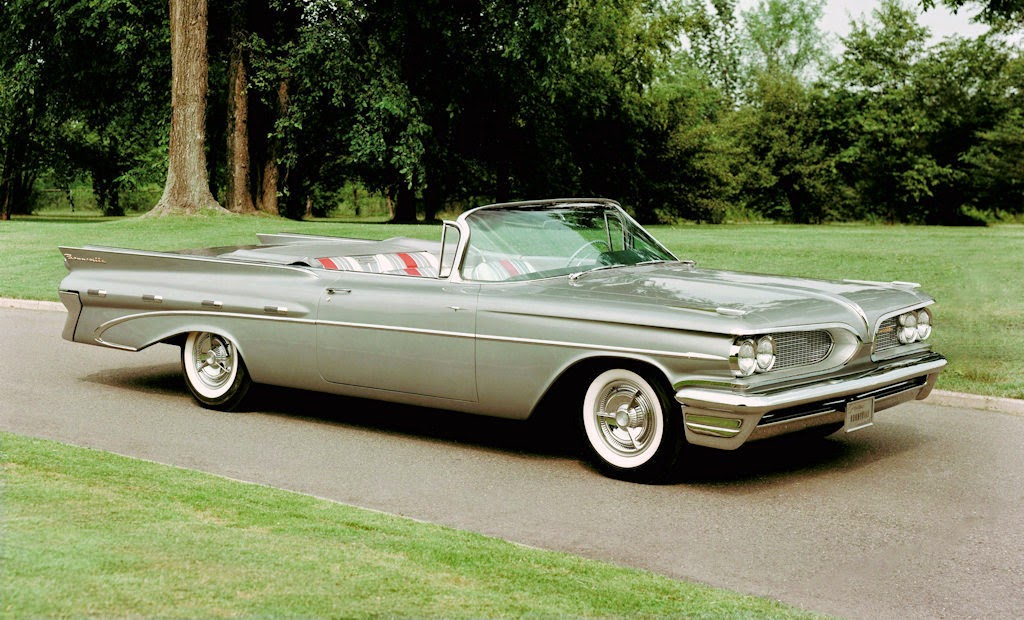 GM appointed Semon E. "Bunky" Knudsen as Pontiac general manager, told him to do what he could with the '55—'56 engineering, and hoped for the best in '57. Knudsen hustled. Though sticking with the same wheelbase, the '57s had very long rear springs mounted in rubber shackles. Ball-joint front suspension, adopted by other GM divisions, was not used, however. New 14-inch tires replaced the previous 15-inchers, and a foot pedal parking brake was instituted, along with an optional automatic antenna. The massive buck-toothed  grille was revised, two-ton switched from its half a-car 1956 pattern to a simpler sweep-spear motif and Silver Streak exterior trim was b a new 347 V8—and Bunky had his day by creating the fast and flashy Bonneville. Providing 300 bhp by way of fuel injection, hydraulic lifters, and racing cam, this $5782 convertible was the fastest Pontiac in history. It was even faster with optional Tri-Power (three two-barrel carbs). A fuel-injected Bonneville was timed at 18 seconds for the standing quarter-mile; one with Tri-Power did the same leap in 16.8. Though fuel injection never proved popular, Bonneville wasn't a hot seller mainly because of its price—only 630 were sold. But it did give the division a whole new performance image. Corporate racing was being played down, however. A few '57 Pontiacs raced with distinction in NASCAR, but were strictly private entries. Yet lack of race victories didn't affect sales. Chevy, Olds, and Buick all suffered downturns from 1956 (as Chrysler products filled the gap), but Pontiac built about 333,000 of its '57 cars and moved to within 51,000 units of Olds. An all-new body should have brought added success in '58, but a recession set in and held the division's production to only 217,000 units. Compared to most GM products that year, Pontiac was really well-styled. A simpler, full-width grille was adopted, quad headlights appeared, and the side spear was wider and now con-cave. Bodies were lower, but not much longer or wider; wheel bases were unchanged. No fewer than seven Catalina hardtops were offered with two or four doors. Bonneville became a regular series with about 12,000 convertibles and hardtops sold.
For 1959, Pontiac shared inner body panels with Chevrolet, Buick, and Olds--and built some of the best-looking cars around. The first of the famous split grilles was introduced, along with modest twin-fin rear fenders and minimal side trim—plus the new Wide-Track chassis. The V8 was puffed up to 389 cid and delivered 315 bhp with Tri-Power. Pontiac also made a new Tempest 420E unit for economy-minded buyers, an engine that could deliver 20 miles per gallon if driven prudently. The old Chieftain and Super Chief were discontinued, replaced by the Catalina series on the 122 wheelbase; Star Chief and Bonneville shared a 124-inch chassis. Bonneville was a real hit, and some 82,000 were sold in '59. During the '50s, Pontiac produced a number of interesting one-offs. The smooth-looking Strato Streak of 1954 was a harbinger of pillarless four-doors to come for '56. Also shown in '54 was the first Bonneville, a Corvette-like two-seater with a canopy-type cockpit and a 100-inch wheelbase. Both of these cars were fit-ted with straight eights. The Strato-Star of 1955 was a two-door, four-seat hardtop that previewed '56 styling. Metallic silver paint and a red leather and brushed aluminum interior were featured, as was flow-through ventilation and the new ohv V8.