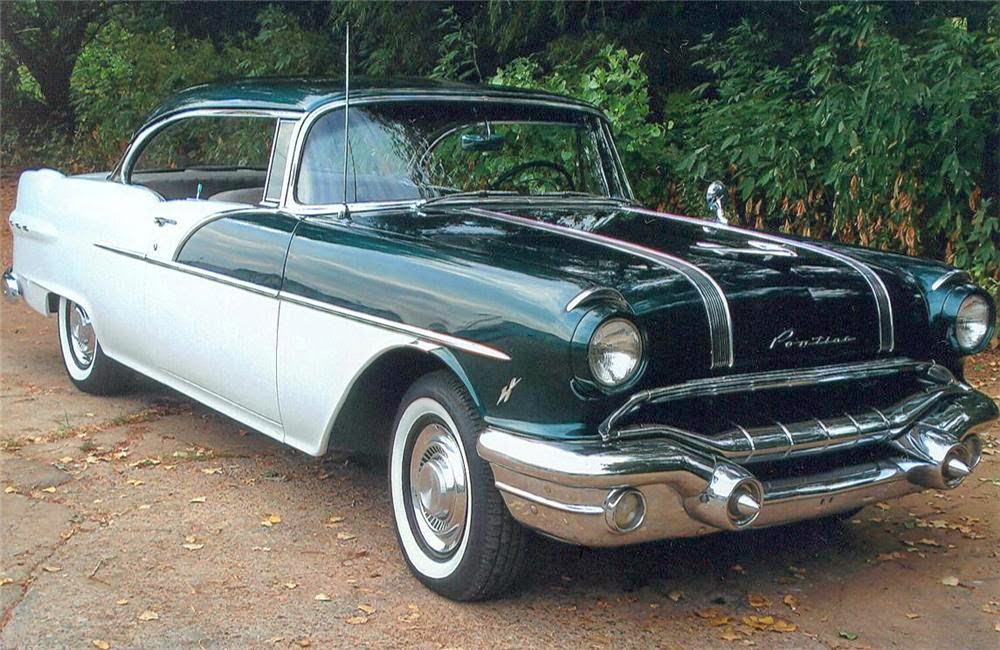 Buying trends were clear as the 1953 models made their debut. Catalina hardtops, for example, were accounting for over 20 percent of volume, and HydraMatic installations had climbed to 84 percent. As a result, the '53s bore a distinct resemblance to earlier styles, but were larger in almost every dimension. New features were a kick-up rear fender line (Pontiac fenders had tapered downward in the past), a lower and more streamlined grille, upright-winged "chief" hood ornament, and a one-piece windshield. Mechanical improvements included optional power steering. HydraMatic models had an especially low rear axle ratio of 3.03:1, which gave smooth top-range performance. A fire in the HydraMatic plant in mid-1953 shortened supplies, however, so about 18,500 Pontiacs were fitted with Chevrolet's Powerglide in '53 and '54. Pontiac did extremely well for model year 1953, producing nearly 419,000 cars. The 1954 models were facelifted '53s, with revised side moldings and a narrow scoop built into the central grille bar. The new top-line series that year was the luxury Star Chief in sedans, hardtop, and convertible form. A big change was hinted at in early 1954: Pontiac's first modern overhead-valve V8. Known as the Strato Streak, it produced 180 bhp, or 200 bhp with optional four-barrel carburetor. Original displacement was 287.2 cubic inches, but it was capable of more and soon grew to over 300 cid. A lively, strong, conventional design with five main bearings, it was up to date, oversquare, and ran on regular gas.
Of course, there was more for 1955 besides a new engine. Pontiac claimed 109 new features altogether, including extensively revised styling and an improved chassis. The lineup consisted of Chieftain and Star Chief series; both featured a wraparound windshield, cowl ventilation, new colors and two-tone combinations, tubeless tires, and a 12-volt electrical system. The 122-inch-wheelbase Chieftain comprised an 860 series of sedans and wagons, and an 870 line of sedans, wagons, and Catalina hardtop. Chieftains included an exotic new hardtop-styled Safari two-door wagon based on the Chevrolet Nomad. Carl Renner, Chevrolet stylist said: "When Pontiac saw [the Nomad] they felt they could do something with it ... Management wanted it for the Pontiac line—so it worked out." Safaris retained this styling through 1957. They were priced higher than equivalent Nomads, of course, and sold in fewer numbers. On balance, 1955 rated as a vintage year for Pontiac. The division built a record 553,000 cars. The lineup was a solid hit with both public and dealers. But Pontiac had some rough times in the later 1950s. The division didn't equal this volume again until 1963, after which it began setting new sales records. The reason was a change in the market. Buick's Special and Oldsmobile's standard 88 were more competitively priced than they'd been before, and demand for lower-medium-price cars was shrinking as import sales steadily increased. Pontiac did not tend to capture the enthusiasm of buyers in the 1956-58 period, even though its cars were certainly competitive in these years, and faster than ever. A mild facelift and the addition of four-door hardtops marked 1956. Styling was less distinctive (Tom McCa-hill said the '56 looked like "it had been born on its nose"). Though the V8 had grown to 316.6 cid, it didn't pack an extraordinary amount of power—only 227 bhp maximum in the Star Chief. Unfortunately, too, the cars had picked up a reputation for a hard ride.