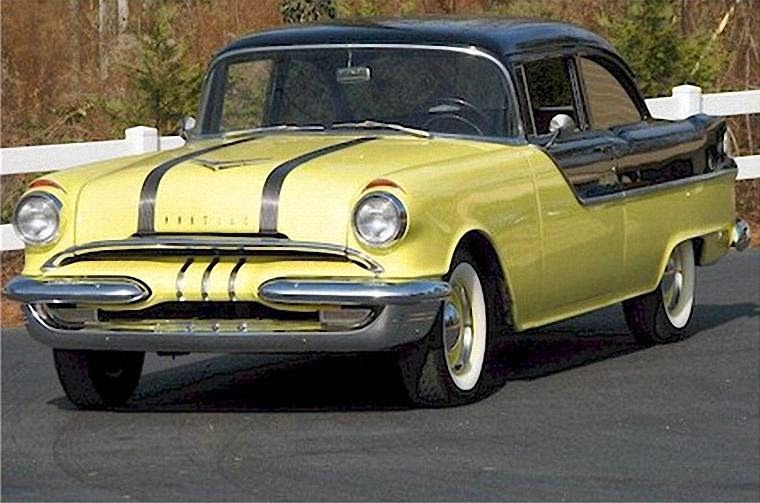 Styling was attractive. A full-width grille was bisected by a single bar and a row of little vertical teeth, a conservative "face" in the automotive world that year. Tradition dictated Exner's silver streaks would continue to adorn the deck and hood. However, the old pontoon-style fenders were replaced by free-flowing front fenders integral with the bodysides. Beitline and roofline were lower than those of any Pontiac that had gone before. Though the '49s looked lighter than the '48s,
they actually weighed a bit more. Performance stayed about the same, despite the small horsepower increase. Inflation was an economic reality in the late '40s, and Pontiac prices rose considerably in 1949. The most expensive convertible model increased by nearly $200 over 1948. The woody wagon now exceeded $2600. The new metal-bodied station wagon was more practical than the woody though, and outsold it. Pontiac was a pioneer of this body style, along with Plymouth and Oldsmobile, and dropped its wood-bodied wagons after '49. During the '50s, Pontiac usually built the right cars at the right time. When buyers began passing up six-cylinder medium-priced cars, Pontiac wisely switched to V8s only; at the height of the horsepower race, Pontiac brought out the Bonneville. For most of the decade, the division maintained competitive prices, which helped win sales, especially from Plymouth and Dodge. Pontiacs of the early '50s still offered six- or eight-cylinder engines in the usual wide array of body styles. For 1950 there were two- and four-door sedans, business and club coupes, all-steel wagons, hardtops, convertibles, and two- and four-door Streamliner fastbacks. Styling was a facelift of the all-new 49 f design. The illuminated countenance o Chief Pontiac was continued as a hood mascot. Optional HydraMatic first year for drive was offered at $158. This was also the a Pontiac hardtop, the Catalina, offered in rst n accounting varieties. By the end of the year, Catalinas were counting for some nine percent of total production. Although 1951 proved less successful in sales volume, it was by no means disappointing to Pontiac. Out-put that year was the second-best in the division's history. (On August 11, the four-millionth Pontiac was built.) The Streamliner fastback two-door sedan, the sole holdover of that style from 1950, was dropped in the spring of '51. Other models were altered little from those of the year before, except for a new "V" grille motif. Pontiac dropped its coupe bodies for 1952, reducing both Six and Eight series to sedans, four-door wagons, Catalinas, and convertibles. Within each line t  Were still three separate trim levels, standard, DeLuxe, and Super Deluxe. This was the last year for the 1949 design, which would be replaced by a new Chieftain Six and Eight on a 122-inch wheelbase. Korean War restriction and a nationwide steel strike slowed 1952 production fifth place. to 271,000 cars, but Pontiac remained in the fifth place.