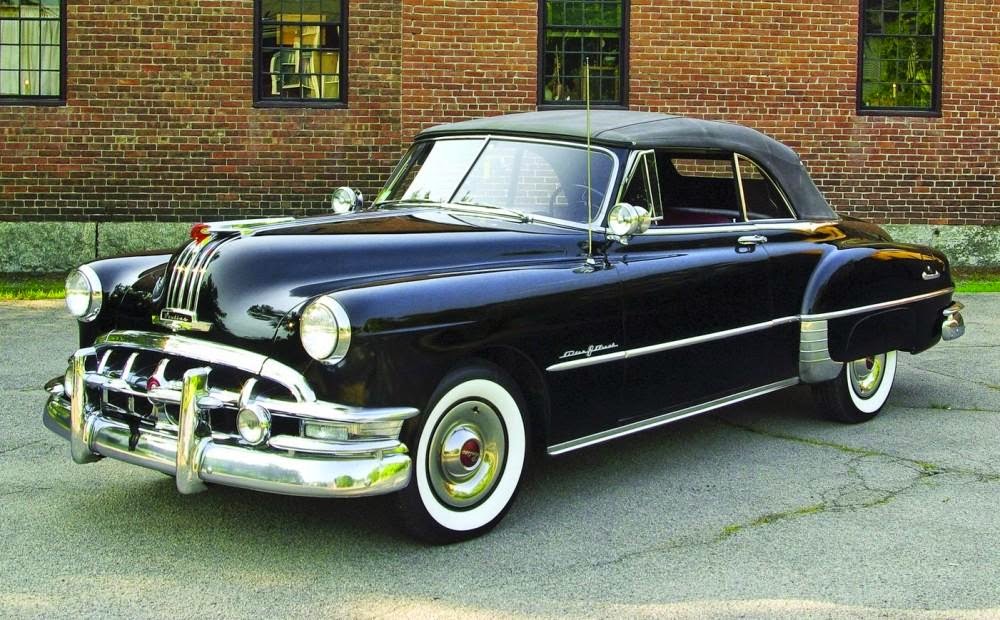 The national recession in 1938 cut output, and Pontiac dropped behind Dodge. But the next year, it built almost twice as many cars. Production in 1940 surged up to a quarter-million for the first time, and Pontiac moved back into fifth place, a position it had not held since 1933. Bill Knudsen decided on a two-series line for 1937-38, and wheelbases were lengthened. Except for a woody wagon on the six-cylinder chassis, body styles were identical for both series: business and sport coupes, cabriolet, two- and four-door sedans and touring sedans, and convertible sedans. The last, eliminated after 1938, was the nicest-looking Pontiac of these years, as well as the most expensive, selling in 1938 for $1310 as a Six and $1358 as an Eight. It's also the rarest body style of this period, so these are naturally among the most sought-after Pontiacs today. As the recession eased in late 1938, Pontiac brought out a restyled 1939 line with three attractive series. Wheel-bases were reduced again and model names altered. A hybrid offering was the Deluxe 120, which used the six-cylinder engine in the 120-inch-wheelbase Deluxe Eight chassis. Both these series shared the same body styles: coupes, sedans, and a convertible. The Quality Deluxe, priced about $50 less than the 120, offered coupes, sedans, and a wagon. There were no engine changes this year and none appeared necessary. The six was reliable and economical; the eight was smoother, perhaps a bit thirstier, but certainly quite powerful. An English road test of a 1938 Eight suggested the car "might be borne along by the wind;' so impressive were its quietness and smoothness.

In 1940 there were two lines for each engine: the six-cylinder Special and DeLuxe, and the eight-cylinder DeLuxe and Torpedo. Each series offered four-passenger coupes and four-door sedans. The lineup also included the Special six-cylinder business coupe and wagon, the DeLuxe six-cylinder "cabriolet" convertible, and the DeLuxe eight-cylinder cabriolet and business coupe. Pontiac engines were sturdy, smooth-running units delivering modest performance with reasonable economy. In keeping with a corporate-wide restyle for 1941, Pontiac adopted higher, crisper fenders embellished with additional silver streaks. A new body style that year was a fastback sedan. Six separate series were offered: DeLuxe, Streamliner, and Custom Torpedos with six- or eight-cylinder engines. The DeLuxe Torpedo com-prised the widest range of body styles, including a Metropolitan sedan with blind rear roof quarters that gave a formal appearance. The convertible was appealing, having clean, sleek lines and a soft top uninterrupted by rear side windows, a treatment reminiscent of earlier custom-bodied Packards. Pontiac sales were good in 1940-217,000 for the model year. Sales were better yet the following year. The DeLuxe series, offering a wide range of body styles, accounted for 150,000 sales. Pontiac was seen as the next step up from Chevy, but was far less luxurious than Oldsmobile or Buick. Trimmed conservatively, it lacked exotic body styles, and was carefully built to a price. But that price was a competitive one: under $800 for the cheapest model in 1940 and just a little more than that in '41. The highest price in those two years was $1250 for the wood-bodied Custom Torpedo station wagon.