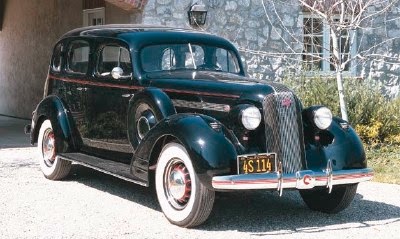 Pontiac continued to capture the majority of division sales through the Oakland's demise in 1931. The 1930-31 line was all six-cylinder, with a conventional inline L-head engine and the usual open and closed body types; sedans and coupes were the most popular. For 1932, the old Oakland and its rough-running V8 became a Pontiac but met with no more success, being outsold by the Sixes by a ratio of over six to one. A major turning point came the following year when the six was replaced by Anibal's newly designed straight eight, which was far more powerful and much smoother than the V8 and thus far more saleable. Initially sized at 223 cubic inches, it was enlarged to 249 cid for 1937, where it would remain through model year 1949. It proved highly reliable, too, and would be the backbone of Pontiac power until the division's first modern high-compression V8 appeared for 1955. Pontiac left sixes to Chevrolet in 1933-34, but would return to them for 1935. Because of Sloan's corporate consolidation, these cars shared many body panels with Chevrolet yet managed to look distinctly different, thanks largely to the efforts of Hershey and chief body engineer Roy Milner. Hershey convinced company styling director Harley Earl of the need for a more streamlined appearance, and accordingly designed a Bentley-type radiator as well as skirted front fenders with little "speed streaks:' Milner gave the open models a smooth deck and made their beltline moldings different from Chevrolet's.

Combined with the firm's new "Knee-Action" independent front suspension and the new straight eight, the 1933 model was a pleasing package. In performance, a Pontiac Eight wouldn't quite keep up with a Ford or Terraplane, but the difference was insignificant. Pontiac's future was now assured. With the economy looking up, a broader model line was tried for 1935, and sixes returned on a new 112-inch wheel-base in Standard and Deluxe guise. For 1937-39, the six was enlarged to 222.8 cid and 85 bhp. The price difference between Sixes and the Eights in 1935 was about $100, which was a lot in those days. The Sixes outsold the Eights by a wide margin through the remainder of the decade. Pontiac styling followed industry trends throughout the period. The 1930-32 models were boxy, upright, and undistinguished. The 1933-34s were among the prettiest medium-price cars of the era. For 1935, the division inherited GM's all-steel "Turret Top" closed body construction and introduced its distinctive "Silver Streak" trim, which started at the cowl and ran straight forward right over the hood and down the grille. It was originated by young designer Virgil Exner, who would later contribute to the early postwar Studebakers and Chrysler's "Forward Look" of the '50s. Exner liked chrome ornamentation, and his Silver Streak hallmark lasted more than 20 years. The 1936-38 models had massive horizontal grilles, yet the vertical streaks continued, resulting in a confused front-end look. That was cured for 1939 with Harley Earl's "twin catwalk" grilles, located between the fenders and main grille. With all-vertical frontal lines, the '39 Pontiac looked much better than previous models. By this time, smoother pontoon fenders and lower overall height had come in, too. Pontiac sales kept increasing through 1937.