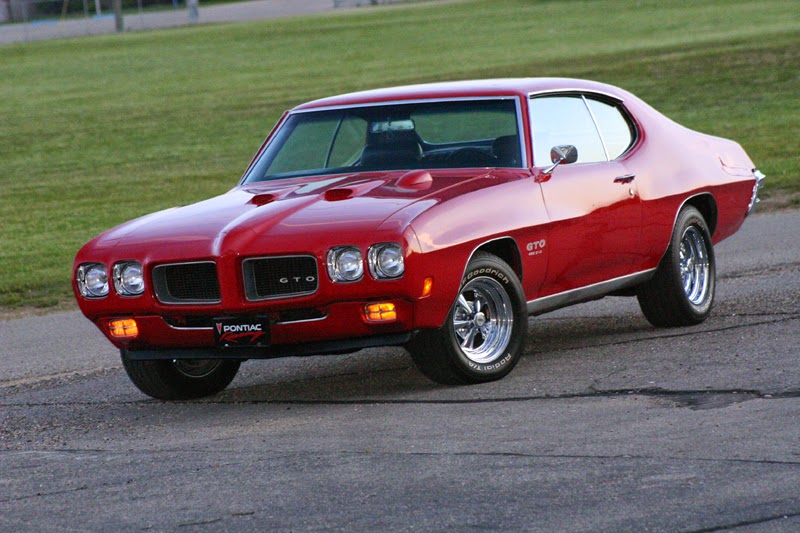 The 115-inch-wheelbase LeMans and Tempest changed little in ensuing years. Vertical headlights and crisp styling for a three-inch-longer body appeared for 1966. "Coke-bottle" rear fenders and a divided vertical-bar grille were featured for '67. In 1968, the cars adopted GM's dual wheelbases of 116 inches for four-doors and 112 inches for two-doors, and borrowed styling themes from the big Pontiacs such as a large bumper/grille. The GTO's standard engine that year was a 400-cid V8 pumping out 350 bhp. It could also be ordered with 360 bhp by way of a Ram-Air hood scoop. The GTO featured an energy-absorbing front bumper made of Endura rubber that was neatly blended into the front-end styling. For performance mainly, Pontiac won its fourth Car of the Year award in 1968. Its 1969 inter-mediates were facelifted and cleaner than the '68s. The hottest GTO was now "The Judge" with a 366-bhp Ram-Air V8 and three-speed manual gearbox with Hurst shifter. The 1970s had all-new styling with changes at the front and rear, plus new bumpers and doors. The end result was a curvy, heavier-looking Tempest, GTO, LeMans, and LeMans Sport. Collectors have since tended to prefer the tidier 1964-69 models. The 1964-65 Tempest's 140-bhp Oldsmobile six gave way to a surprise engine for '66: an overhead-cam six. The first performance six since the Hudson Hornet, and not in a league with hairier GTOs, the ohc was never-theless satisfying. Typical acceleration for the Sprint version was 0 to 60 in 10 seconds flat and a top speed of 115 mph. With a capacity of 230 cid, it developed either 165 bhp standard or 207 in Sprint form (with Rochester Quadra-Jet carburetor, hotter valve timing, and double valve springs).

The crankshaft had seven main bearings; the camshaft was driven by a fiberglass-rein-forced notched belt rather than conventional chain or gear drive. The optional four-speed transmission, clean styling, and an interior that featured bucket seats and console gave the Sprint the look and feel of a true grand touring car. But its life span was short. By 1968, the Tempest had grown bulky. and by 1970, the engine had been emasculated by emission controls and detuning and was soon discontinued. Since Pontiac had such a good reputation for performance and handling, division managers knew that the Firebird "ponycar," based on the Chevrolet Camaro, had to be something special. Although it used the Camaro's bodyshell and 108-inch wheelbase, Fire-bird had its own divided grille and an optional 400-cid V8. Optional engines included the ohc six, which made it a sprightly yet economical performer.