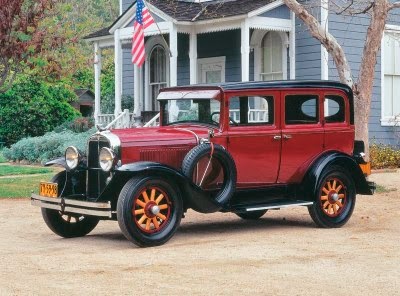 Pontiac remains the only General Motors nameplate  introduced after the company's founding in 1908 to survive past 1940. Ifs also the only survivor among GM's four original companion makes, which appeared beginning in the mid-1920's, But Pontiac's future was far from secure in the early Depression years. The first car to bear the name, the Pontiac Six of 1926, quickly proved far more popular than parent Oakland (see entry), and pushed total division sales to over 200,000 units by 1929. Then came the Great Crash and, as everywhere else in the industry, Pontiac sales plummeted, hitting rock-bottom in 1932 at less than 47,000 units. What saved the make was the calm, confident policies of GM president Alfred Sloan, who combined Pontiac and Chevrolet manufacturing facilities in early 1933, thus saving vast amounts in tooling expenses through greater use of shared components. At the same time, he consolidated Buick, Oldsmobile, and Pontiac sales operations, with existing dealers for each make now required to sell the other two as well. These belt•tightening measures were in force through mid-1934 and, in effect, reduced GM to three divisions: Cadillac, Chevrolet, and &O-P. The well-styled Pontiac Eight for 1933 turned the mare que's fortunes around completely. The division was back over the 200,000 mark by 1937, and would continue as one of the top five or six industry producers through the end of the 1940's. A group of highly competent leaders contributed mightily to this recovery. Among the more notable were former Ford executive William S. "Big Bill" Knudsen; chief engineer Benjamin H. Anibal, father of the Pontiac eight; and studio stylist Frank Hershey, creator of the hand-some '33 and subsequent models.