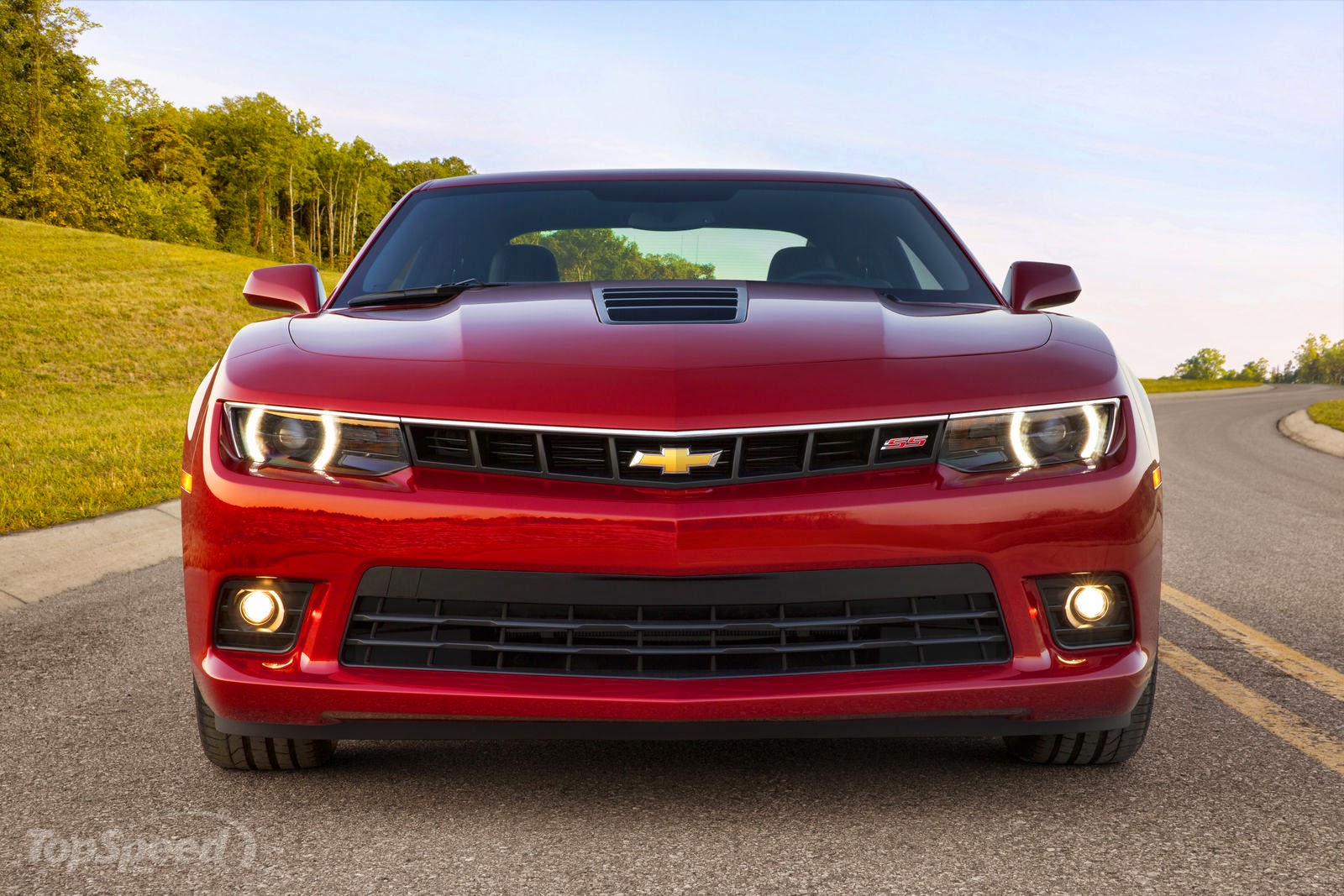 New for 2015
The 2015 Chevrolet Camaro adds the Z/28 variant and a new exterior color called Blue Velvet Metallic.
Vehicle Summary
The 2015 Chevrolet Camaro is a sports car that slots underneath the SS sports sedan. It is sold in coupe or convertible body styles, seven trims and four engines choices. All models are mated to a six-speed manual or automatic transmission.

The 2015 Chevrolet Camaro range covers everything for a sports car one can drive on a daily basis to hardcore track machines with impressive power and handling.
Engine: 3.6-liter V-6 – six-speed manual or automatic (LS and LT grades)
Power: 323 hp/278 lb-ft of torque
EPA-Rated Fuel Economy: 18/27 mpg city/highway (automatic), 17/28 mpg (manual), 19/30 mpg (automatic, 2LS grade)
Engine: 6.2-liter V-8 – six-speed manual or automatic (SS grade)
Power: 426 hp/420 lb-ft (manual), 400 hp/410 lb-ft (automatic)
EPA-Rated Fuel Economy: 16/24 mpg (manual), 15/24 mpg (automatic)
Engine: supercharged 6.2-liter V-8 – six-speed manual or automatic (ZL1)
Power: 580 hp/556 lb-ft
EPA-Rated Fuel Economy: 14/19 mpg (manual), 12/18 mpg (automatic)
Engine: 7.0-liter V-8 – six-speed manual only (Z/28)
Power: 505 hp/485 lb-ft
EPA-Rated Fuel Economy: 13/19 mpg
Camaros with the V-6 blend daily usability with good handling and power. Opting for the RS Package sharpens V-6 variants' handling with bigger wheels and a stiffer suspension setup. SS models add even more performance with a V-8 engine and stiffer suspension setup for those seeking more out of the car. Ride quality is stiff but never "jarring or punishing," making it an excellent choice as a daily driver.
The Z/28 and ZL1 variants are the most hardcore, with powerful engines and track-tuned chassis intended for unlimited performance. These models, particularly the Z/28, eschew creature comforts to make the car lighter and improve its overall performance. On the other hand, the ZL1 is a highly capable car that doesn't sacrifice everyday usability and "balances ride and handling beautifully." Its ride remains tolerable due to the use of GM's Magnetic Ride Control as a way to keep the car comfortable and daily drivable.
Interior space is cramped with a small trunk and rear seats that are not usable for adult occupants. Additionally, visibility remains a problem due to its small windows, which are hard to see out of and makes maneuvering the car in tight spaces difficult.
The 2015 Chevrolet Camaro has a five-star overall safety rating from the NHTSA (out of a possible five stars).

Although visibility and interior space are lacking in the 2015 Chevrolet Camaro, it fulfills its main purpose as a sports car that one can live with on a daily basis and appeals to a broad audience. Its excellent handling remains one of its hallmarks because all models have superb driving dynamics despite weighing over two tons. Z/28 and ZL1 models prove that supercar levels of performance don't mean sacrificing daily usability. In a 2012 Comparison Test between the Camaro ZL1 and Shelby GT500, we said that the former's Magnetic Ride Control make it the superior daily driver since it offers "an impressive performance range, smoothing out the impacts of rough pavement in Tour Mode and keeping the heavy chassis under control in Sport mode."
The Camaro Z/28 won Motor Trend's Best Driver's Car for 2014 because of its world class handling and suspension that remains very stiff but "don't unsettle the car" or "test your nerve."
You'll Like
You Won't Like
Key Competitors
Original Post