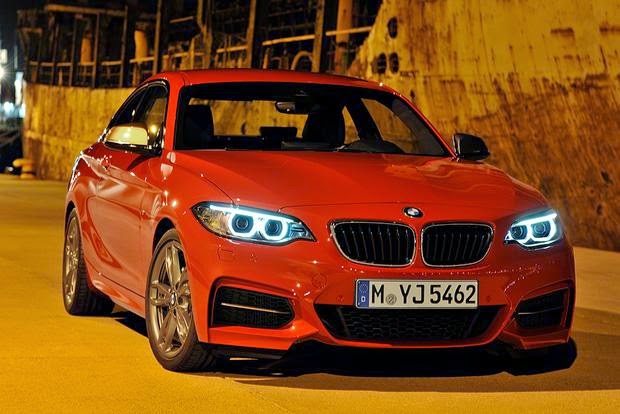 The 2015 BMW 2 Series will never be a true heir to the classic BMW 2002 of the '60s and '70s, no matter how many photos BMW shows us of the two cars side by side. The "2er," as the Germans like to call it, is too high-tech and too insulated. It's simply too modern to compare.
Relative to the rest of BMW's current lineup, the 2 Series is indeed a throwback of sorts. Offered as either a coupe or a soft-top convertible, it's small and nimble with the sort of performance-based ethos that the company has moved away from in recent years. Whether you stick with the eager, turbocharged 4-cylinder engine (228i) or upgrade to the sweet, inline 6-cylinder engine (M235i), the 2 Series just might be the most engaging car that BMW makes.
If you're looking for comparable fun and refinement at a modest price point, few, if any, rivals measure up. Keep an eye on the options, however. They can easily send the bottom line skyrocketing into 4 Series (or pristine used M3) territory.
A judiciously equipped 2015 2 Series is all the car most drivers could ever want. The Ultimate Driving Machine is alive and well these days; you just have to know where to look for it.

The 2015 2 Series is offered as a coupe or soft-top convertible in either 228i or M235i trim. BMW's xDrive all-wheel-drive system is an $1,800 option on all models except for the rear-wheel-drive-only M235i convertible.
The base 228i coupe ($33,050) comes standard with the turbo 4-cylinder engine, 17-inch alloy wheels, fog lights, push-button ignition, manually adjustable front seats, leatherette upholstery, dual-zone automatic climate control, 60/40-split folding rear seatbacks, Bluetooth, iPod/USB connectivity and the iDrive infotainment system with a 6.5-in screen.
The 228i convertible ($38,850) substitutes a power-retractable soft top in black, brown or Anthracite with silver accents.
The M235i coupe ($44,050) adds a slew of features, including the turbo 6-cylinder engine, 18-in M-designed wheels, an adaptive M Sport suspension, upgraded brakes, variable-ratio steering, adaptive xenon headlights, a sunroof, 10-way power front sport seats with driver memory, a sport instrument cluster and dynamic cruise control.
The M235i convertible ($48,650) shares the 228i convertible's soft top.
The 228i offers a wider range of options than its high-performance sibling does. You can dress up the aesthetics and handling with the Sport Line package (18-in alloys, sporty styling cues, excellent manual sport front seats), while the M Sport package takes the 228i even closer to the M235i's standard state of tune (including an adaptive suspension). The Track Handling package equips the 228i with the M car's variable-ratio steering and upgraded brakes, and it also includes the adaptive suspension if you decide against the M Sport package.
All 2 Series models offer Premium and Technology packages that provide the latest in luxury and gadgetry, along with a stand-alone 12-speaker Harmon Kardon audio system. Numerous other options and packages are available.
Trunk space is a 2 Series strength, measuring just under 14 cu ft. for the coupe, which is a lot of space for a little 2-door car. The convertible offers about 9 cu ft., which BMW says is enough to accommodate the all-important pair of golf bags.

The 2015 2 Series comes standard with stability control and 4-wheel anti-lock disc brakes. The coupe gets eight airbags (front, front-side, front-knee, full-length side-curtain), while the convertible comes with six (all except the side-curtain airbags).
Other available safety features include BMW Assist, which adds automatic crash notification and roadside assistance, a lane-departure warning system and a forward-collision mitigation system with automatic emergency braking.
In independent crash-testing, the Insurance Institute for Highway Safety gave the 2 Series its top score of Good in every tested category.

The 2015 BMW 2 Series feels small and taut from the driver's seat, and that's a welcome departure from BMW's current norm. It's even smaller from the back seat, which generally remains a kids-only affair, but we're used to that from the similar 1 Series, the 2er's predecessor. Eschewing the thickly padded luxury that has become the brand's trademark, the 2 Series leaves no doubt that it's here to entertain you. Luckily, interior materials have improved a lot compared to the rather basic 1 Series. The ride is quite supple, so there's more refinement than ever. The 2er's focus is clearly on razor-sharp responses, and that makes it a special car, particularly given its reasonable pricing.
Under the hood, the base 4-cylinder engine feels like it's punching above its output numbers, per BMW's norm. There are those who will tell you that the cheaper 4-cylinder engine is all you need, since you can always just turn up the turbo boost via an aftermarket kit. We're inclined to agree. As awesome as the M235i's inline 6-cylinder engine feels (and sounds) at full throttle, it carries a premium of $11,000 in coupe form, and we don't think it's worth it just to save a few tenths of a second during acceleration runs. Either way, we like the manual shifter's throws, but the ultrasmooth automatic actually gets better fuel economy, which is something to keep in mind.
Original Post